How to Make Ghee 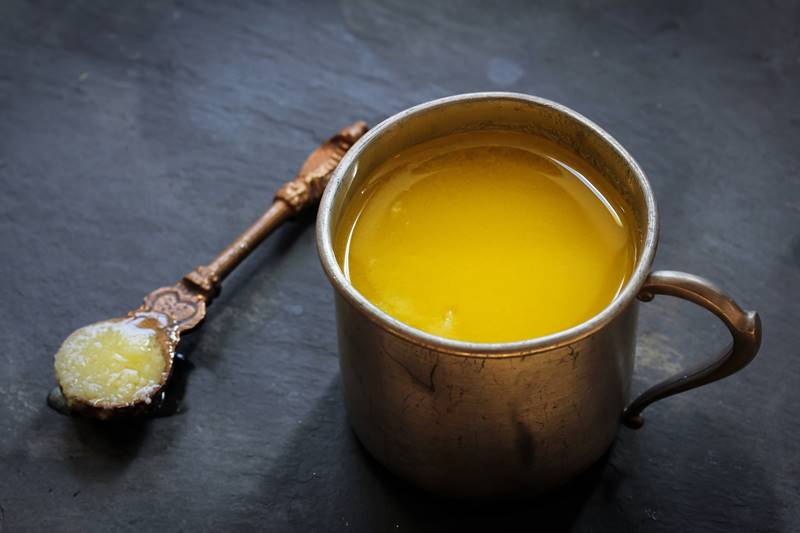 Put the butter (ideally cultured-details on how to prepare at home below. If no time to make just buy cultured butter) in a heavy, medium-sized pan. Turn the heat on to medium until the butter melts. Turn down the heat until the butter just boils and continue to cook at this heat. Do not cover the pot. The butter will foam and sputter while it cooks. White curds will begin to form on the bottom of the pot. The butter will begin to smell like popcorn after a while and turn a lovely golden color. Keep a close watch on the ghee, as it can easily burn. Ideally use this time to create a meditative space, feel free to add healing mantras of your choice, do some yoga asana and take deep breaths like I do in my video tutorial 😉 After a while it will become a clear, golden color. If the ghee is clear all the way through to the bottom and has stopped sputtering and making noise, then it needs to be taken off the heat. Let it cool until just warm.

Pour it through a fine metal sieve or layers of cheesecloth (or both as I do) into a clean, dry glass container with a tight lid. Discard the curds at the bottom of the saucepan. The ghee is burned if it has a nutty smell and is slightly brown or like I mention, it may smell like burnt popcorn! 1 pound of butter takes about 15-20 minutes of cooking time. The more butter you are using, the more time it will take. Ghee can be kept on the kitchen shelf, covered. It does not need refrigeration. The medicinal properties are said to improve with age. Don’t ladle out the ghee with a wet spoon or allow any water to get into the container, as this will create conditions for bacteria to grow and spoil the ghee. Two pounds of butter will fill a quart jar with ghee.

See, that wasn’t so difficult, right?!

When I do Ayurveda cooking classes, my students are always so amazed at how easy it is to make ghee and it’s so worth it, as the healing benefits are innumerable!! If you have always wanted to learn how to cook, you may want to invest in an Ayurveda cooking class, as you will not only learn how to cook, but also how to heal yourself and your family by using your kitchen pharmacy. I offer cooking classes on all my yoga and Ayurveda retreats and teacher trainings, just in case you also wanted to study with yours truly and enjoy a rejuvenating vacation at the same time!

If you have high cholesterol, you should be careful still, although it is a better choice than butter. It will help to keep you flexible and can help enhance intelligence, memory, assimilation and absorption of nutrients. In the medicine of Ayurveda, ghee is known as a ‘yogavahi’. Any substance that could boost the availability or effectiveness of another substance or food that it is taken with is called yogavahi.

Ingesting ghee, whether in a culinary context or as a carrier for the nutrients in herbs, serves to lubricate and heal the intestinal tract and all the tissues of the body, from the blood to the muscles to the nervous system and bones. And why exactly does the intestinal tract love ghee so much? Because it makes its own, of course! Seriously though, recent research has attested to the fact that the beneficial microbes in the gut actually make butyric acid, the active ingredient in butter – and even more concentrated in ghee – that supports immunity and protects the integrity of the lining of the gut wall.

So eating ghee doesn’t only provide happy taste buds, it makes happy beneficial bacteria in your precious gut – the site of digestion and nutrient assimilation, the production of many mood-regulating neurotransmitters, and the maintenance of strong immunity.

Ghee, along with Turmeric are the golden secrets that unite the medicine of Ayurveda and Indian cuisine. A delicate, aromatic substance that is solid at room temperature and melts into a liquid as it warms, ghee can be considered vegetarian as it is now an oil (the lactose, casein, and milk solids have been removed) that can be used for cooking. Its very high flashpoint of 485 degrees Fahrenheit makes it one of the best oils to safely cook with, but in the true tradition of Ayurveda, you can also successfully use it as a massage oil, a carrier for ingesting herbs, a wondrous anti-aging cream and a soothing balm for the eyes, among other uses.

During an Ayurvedic cleanse (Panchakarma), it is used as the preferred vehicle for oleation, a process of ingesting increasing amounts of (medicated) oil over a series of mornings. As ghee has a lipophilic action,his actually helps pull fat soluble toxins (the stubborn ones – water soluble toxins usually flush out with our urine) out of the cells and triggers fat metabolism, a process whereby the body begins to burn its own fat for fuel. When I did my 30 day Panchakarma, I drank 180mL of this by the 7th morning of the oleation phase of my cleanse. It was a truly unbearable nauseating process (blog with details coming soon…), but it was 100% effective and worth it…and yes I would do it again!

According to Ayurveda, digestion is everything! In fact it’s not what you eat, but rather what you actually digest that counts! So feed your digestive tract the food of the Gods and Goddesses – luminescent, gorgeous, golden ghee.

5 WAYS TO INFUSE YOUR GHEE WITH HEALING PRANIC ENERGY

The great mantra dedicated to Shiva as Mrityunjaya is found in the Rig Veda. It is called the Maha Mrityunjaya mantra, the Great Death-Conquering mantra. It holds the highest place among the many mantras used for contemplation and meditation and it is known as the best mantra for preparing ghee. The over all meaning of entire mantra is: We concentrate on our third eye which lies behind the two eyes and this gives us the power to feel you and by this we feel happy,satisfied and peace in life. We know immortality is not possible but some extension can be given to our death by your powers Lord Shiva.

The great mantra dedicated to the Goddess Chamunda, who within herself integrates the three great Goddesses of Saraswati, Laxshmi/Durga and Kali along with their three elements Air, Fire, Water and the doshas Vata, Pitta and Kapha.

Through your focused attention you will create a meditative state, which is ideal for making ghee, as infusing your ghee with your moment to moment awareness will enhance the healing properties of the ghee and also full attention is needed in order to avoid burning and therefor ruining the ghee.

3. PREPARE THE GHEE ON THE FULL MOON

Traditionally it is said that preparing the ghee on the full moon will greatly enhance the healing properties.

4. HONOUR THE 5 ELEMENTS IN YOUR KITCHEN IN THE FOLLOWING WAYS

ETHER- WITH A FLOWER

FIRE- WITH A CANDLE

WATER- WITH A BEAUTIFUL GLASS JAR, WITH SOME CRYSTALS INSIDE TO CHARGE THE FILTERED WATER TO HYDRATE

EARTH- WITH A PLANT, ROOTED IN SOIL AND/OR USE EARTHEN SERVING DISHES

By adding a few crushed garlic cloves or a pinch of turmeric and freshly ground fenugreek seeds to add flavour and healing benefits. Then there is glorious medicated ghee, but that is an entirely different process…and blog entry 😉

LIKE I MENTION IN THE VIDEO~ THE AUTHENTIC TRADITIONAL METHOD OF PREPARING GHEE IS AS FOLLOWS:

1) Get raw organic milk. 2) Boil the milk 3) Add curd once it cools down to 110ºF/44ºC. Half a table spoon per liter. 4) Wait 8+ hours for curd to form. Leave it in a warm place 5) Churn curd. Important: It must be in between 60 and 70 degrees farenheit, it will vary according to seasons and the milk consistency. Make your own butter churn video: http://www.youtube.com/watch?v=YD8ajJ… If you can’t make your own churning machine, or for small batches, you can purchase the one in the video at: http://www.amazon.com/MANUAL-CREAM-SE… Warning: Don’t use blender because it will heat up the curd because it only rotates in one direction. 6) Skim the butter. Add cold water to make separation easier. You can offer the buttermilk to Kṛṣṇa by adding a little sugar and Tulsī leaf. 7) Make ghee. Heat up in pan slowly, remove foam on top, and take out of heat when ghee is clear and before solids burn. Filter through organic unbleached cheesecloth. 8) Offer to Kṛṣṇa